We received the following from the Christian Institute. If you want to learn the current status of the Ashers appeal and where they’re at, please do attend, but most of all please remember all in your prayers!

Due to popular demand, the venue for the Stand With Ashers meeting on the evening of Wednesday 25 April has been changed.

The meeting in Newtownabbey district has been moved to the Dunadry Hotel – a five minute drive from the original venue, Templeton Hotel.

The meeting will still begin at 8pm as advertised. 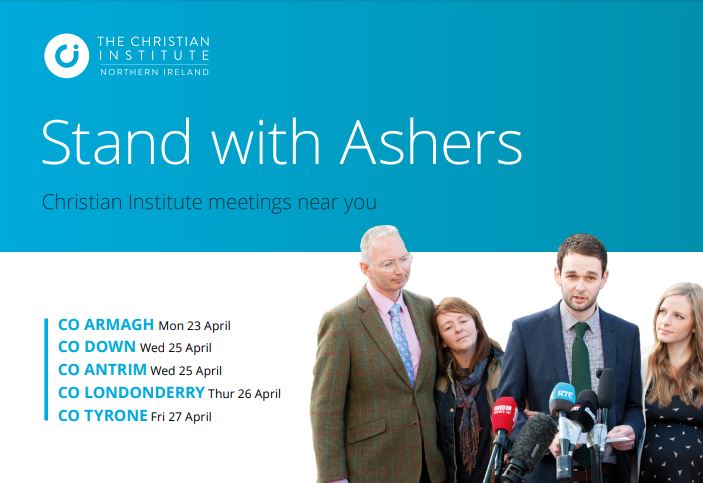 You are warmly invited to join with us at a series of special Christian Institute meetings across Northern Ireland to show your support for the McArthur family on the verge of their Supreme Court appeal. The events are planned as follows:

The Christian Institute supported the McArthur family as their case went to the Court of Appeal and now we are helping them appeal to the UK Supreme Court.

The same presentation will be given at all five venues. You will hear the latest news about the case, and the implications of the ruling for freedom of speech, freedom of conscience and Gospel freedom. You will also hear matters for prayer and action.

I am torn between the two: I desire to depart and be with Christ, which is better by far; but it is more necessary for you that I remain in the body.
Philippians 1:23-24